Tesserete provided the backdrop for the third medal race of the European Championships, hosting the Mixed Sprint Relay. This hilly town provided a different challenge to the sprint finals on Sunday, with a combination between a section of narrow alleyways in the old town on the side of the hill, and the more modern town in the base of the valley, along with a small section of parkland at the end. A limited amount of gaffling on the courses, and the high focus on running on the hills, meant that a high running capacity would govern the days racing.

Luckily, the rigorously scheduled afternoon thunderstorms managed to keep at bay, and the runners were met with sunny skies for their race. However, a light shower prior to the start gave the runners an added challenge to cope with, with many runners (including both GBR women, taking falls on the greasy surfaces).

The GBR team was made up of Charlotte Ward, Peter Hodkinson, Kris Jones and Alice Leake. Starting in the mass start the nervous tension was obvious to see, with runners panicking and missing routes to the first control. Charlotte stayed calm throughout this, and popped out at the first TV control in 5th place, with the Swiss team headed by Judith Wyder front running at the head of the pack. Wyder would extend her lead throughout the course, building up a significant buffer to enter the first changeover a minute clear of the chasing pack. Charlotte came through the spectator in 3rd and would hold this place to hand over to Peter.

Out in the main chasing pack, Peter settled to his task well. With Swedish runner Emil Svensk breaking away from the chase in the old town to close the gap to the Swiss runner Florian Howard by 30 seconds, Peter was stuck in a battle with Norway, Italy and Russia, with a couple of small hesitations letting Svensk slip out of sight.

Out of the third leg, Martin Hubmann for Switzerland stabilised their lead, not losing any further time to the chasing Jonas Leanderson. Kris initially began gaining on the Swede, but a small mistake impacted the chase. Despite this he gained time, breaking away from the main chasing pack to send out Alice Leake 25 seconds down on Sweden and with a 30-second gap to the formidable trio of Norway, Czech Republic and Russia behind, with Austria a few seconds further back.

Out of the last leg Alice started very strongly, holding the gap between Elena Roos of Switzerland and Karolin Olsson of Sweden by the first TV split, and increasing her buffer to a minute over the chasing pack. The brutal nature of the area began to take its toll though, and a couple of mistakes came just after the Old Town, leaving the trio of Norway, Czech and Austria just 20 seconds behind. Whilst the Swiss were clear for gold and Sweden were now comfortable in silver medal position; behind, however, it was gruppo compacto at the spectator run-through. Alice had given her all on the course, but continued to fight for the bronze, but sadly the other women simply had strong legs for the final climb before the drop to the finish, and it was Norway - anchored by Andrine Benjaminsen - who would seal the bronze medal. 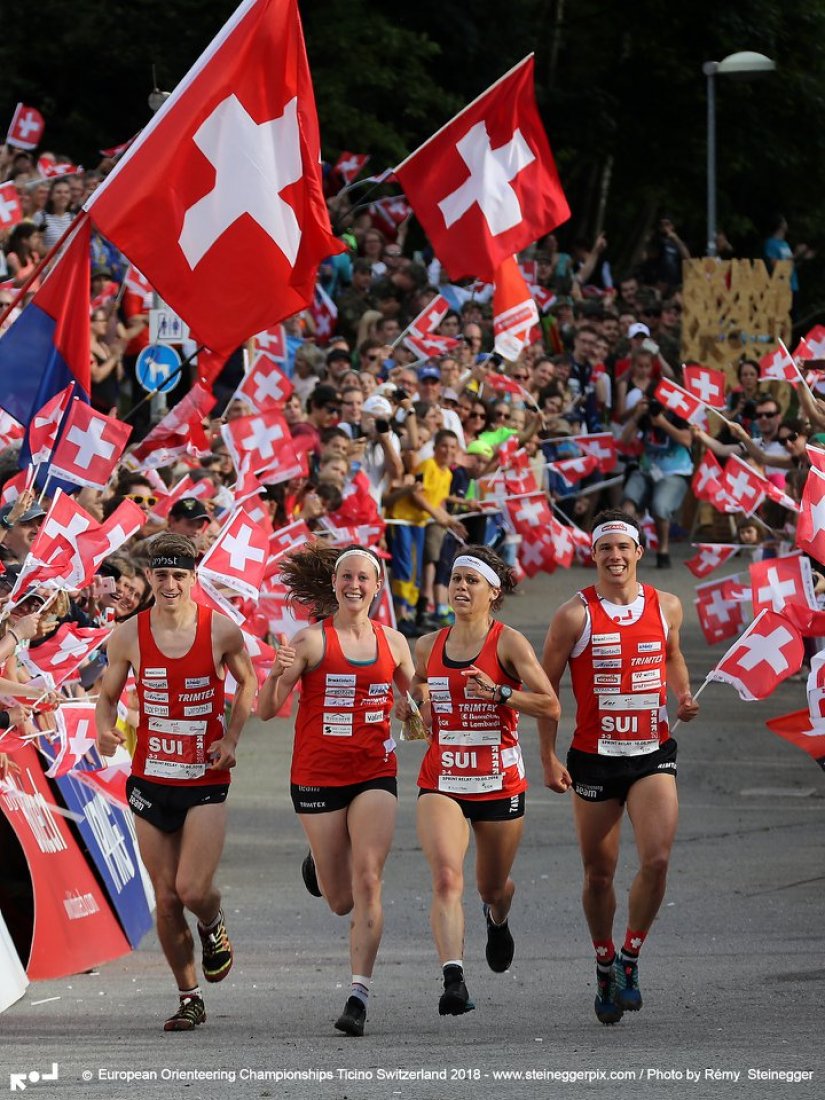 The European Championships now takes a day's break before continuing with the Forest Relay on Saturday afternoon with the Women's Relay at 2 pm followed by the Men at 4:05 pm. Catch all the action on liveorienteering.com or follow the results as they come in on www.eoc2018.live.