The closing date for ALL nominations is fast approaching!

There are now less than 3 weeks to go before nominations close.

Please note all nominations need to be sent to: info@britishorienteering.org.uk by Friday 6 March 2020.

Each year British Orienteering presents a number of awards to recognise the incredible effort and impact delivered by clubs, coaches and volunteers across orienteering.

Who do you think deserves official recognition for their hard work and commitment to our sport?

The Award Categories open for nominations:

Is your club an important part of the local community?

If the answer is “Yes” why not enter the British Orienteering Club of the Year Award.

Club Of The Year Nomination Form

2.  University Club of the Year Award

This award recognises the efforts of University Clubs in the development of participants as well as coaches and volunteers. The award is also to show appreciation for the University introducing and providing a gateway to the sport to their students.

3.  Young Volunteer of the Year Award

This award is for a volunteer, under the age of 25, who has demonstrated a commitment to supporting delivery of orienteering activity with passion, energy and enthusiasm.

4.  Coach of the Year Award

Coach of the Year award is looking for coaches who demonstrate success in one or more of the following areas:

Coach of the Year Nomination Form

5.  Volunteer of the Year Award

This award is for a volunteer who has demonstrated a commitment to supporting the delivery of orienteering activity with passion, energy, and enthusiasm.

Volunteer of the Year Nomination Form

In 1983 SILVA (Sweden) AB decided to mark the fiftieth anniversary of the first Silva compass by establishing an annual award within each IOF member Federation. The awards were to enable Federations to honour those who have contributed in a special way to the development of orienteering. With the assistance of SILVA (UK) Ltd this was interpreted, within the UK, as being a person or persons who have made a very significant contribution to orienteering over a period of years, with an emphasis on ‘field' activities rather than committee work.  Indeed, nominees may not be active or retiring members of the British Orienteering Board, nor part- or full-time employees of the Federation.

All members can nominate someone they believe has made a significant contribution to orienteering through ‘field’ activities.

Who do you think deserves official recognition for their hard work and commitment to our sport?

Who are you going to nominate for the above awards?

All nominations for the awards below should be made by Friday 6 March 2020 and sent to: info@britishorienteering.org.uk

To encourage the production of high quality maps the Map Group, on behalf of British Orienteering, awards a number of trophies to encourage high standards of mapping and related activities.

The Mapping Award Categories are as follows:

The Chichester Trophy was donated by the Honorary President of the British Orienteering Federation in 1971, Sir Francis Chichester. The Trophy consists of the binnacle compass used on Sir Francis' 'round the world' yacht, Gipsy Moth V, mounted on a wooden plinth. The Trophy was first awarded in 1971 to Robin Harvey and Sue Bone for their map of Leith Hill. It was originally awarded for the Best Map produced in a single year, though later it was awarded for multiple maps or contribution to mapping. In 1985, with the introduction of the 'Bonington Trophy', the 'Chichester Trophy' reverted to the original concept of the best map produced by an amateur mapper.

With the high standard of professionally surveyed and drawn orienteering maps being produced in Britain, the British Orienteering Map Group decided, in 1992, that a new trophy should be awarded in recognition of these mapping companies. The Map Group annually awards the 'Silva Trophy' to the best professionally produced map. This trophy, sponsored by Silva U.K.Ltd. is made from Stourbridge crystal. This irregular shape, called cullet in the trade, is formed when the unused crystal cools. The base was made by Mike Baggott of Harlequins from English elm and the solid silver plate was purchased from a bullion supplier in Birmingham’s Jewellery Quarter and engraved nearby.

This trophy was made by Mike Baggott of HOC and is sponsored by Walsh Shoes. The trophy is made of old walnut with a triangular cross-section and an etched plate with an image of Canary Wharf, London. It is awarded annually to the best urban or sprint map drawn to ISSOM specification.

This trophy was donated to British Orienteering by its Honorary President, Sir Chris Bonington, the world-famous mountaineer. The trophy consists of a piece of rock collected from the summit of Mount Everest on Chris' 1985 expedition, mounted on a wooden plinth. It is awarded annually for the 'best contribution to mapping' which can cover a whole range of activities related to mapping.

Download the relevant mapping nomination form from the links above and get your nominations sent in to:
info@britishorienteering.org.uk without any delay!

British Orienteering is creating an exciting new role to address the increasing environmental, economic and regulatory challenges we face in securing access to the countryside for orienteering. This new position will be part-time for two days per week and can be carried out remotely or at British Orienteering’s National Office in Matlock.

You will be a knowledgeable, enthusiastic and passionate advocate for the sport of orienteering. You will have a professional understanding of the importance of access to the countryside, with relevant technical, legal and environmental knowledge, and experience of putting this knowledge into practice.

You will not be afraid to experiment and will develop new initiatives in partnership with a wide range of stakeholders, including landowners, environmental organisations, other NGBs, and voluntary and special interest groups. The role requires excellent interpersonal and organisational skills, with the aim of providing a modern, responsive and effective service delivering good quality access to the countryside for the sport including clubs and associations.

This is a demanding, varied and rewarding role. If you are committed to the positive benefits of sport and access to the outdoors, as well as to promoting sustainable and responsible use of the countryside, we’d like to hear from you.

To apply, please request an application from info@britishorienteering.org.uk.

The Yvette Baker Trophy and Shield, the annual programme of club junior orienteering competitions, starts later this month (Saturday 29 February 2020) with the Welsh heat at Merthyr Common in South Wales.

Sarah Mansel, Yvette Baker Coordinator, says: "We have an exciting programme of regional heats lined up for 2020. There will be 9 heats all over the country during the spring, culminating with the final in July at Tetbury, centrally located in the beautiful Cotswolds. The Yvette Baker is a wonderful chance for clubs of all sizes to build a team and have fun competing against other clubs.”

The list of regional heats and final in 2020, the competition rules and the list of eligible clubs, showing which clubs compete in the Trophy vs the Shield, are contained on the competition website: www.britishorienteering.org.uk/yvettebaker

Good luck to all clubs and junior orienteers in 2020!

Photos above:  Left:  South Yorkshire Orienteers (SYO) have won the Trophy for past three years and go from strength to strength.  Will 2020 be the year that another club finally topples SYO?  Right:  Essex Stragglers (SOS) were delighted to win the Shield in 2019, but with nearly 40 clubs eligible for the smaller club competition, they will face stiff opposition!

The Yvette Baker Trophy and Shield are the premier Junior Inter-Club competitions for English and Welsh orienteering clubs.

The Yvette Baker Trophy and Shield are named after Britain's first World Orienteering Champion Yvette Baker, who won Gold in the Short Distance event at the World Championships in Scotland in 1999. 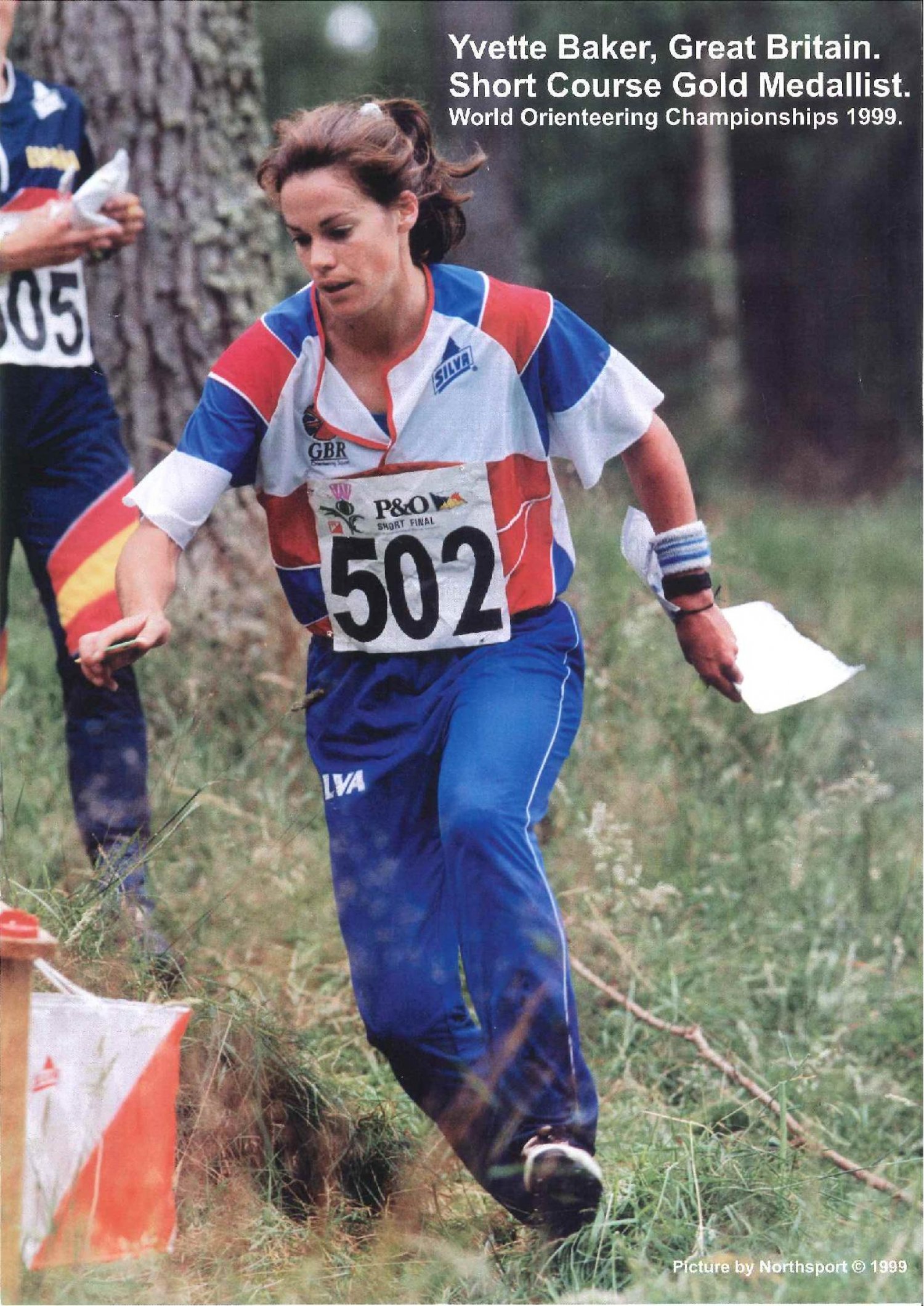 We apologise to all those that attended on the environment for the meeting.

All three proposals were carried by the meeting:

The 2017 Accounts were adopted

No changes were proposed to the event levy

Judith Holt (Chair) presented Philip Baxter and David Maliphant with a certificate and an engraved pen on behalf of British Orienteering.