#JKMemories : All Sorts of Odd Memories - by Graham Nilsen (DEE)

All sorts of odd memories

My first was JK '73, in Scotland. The story went around that a group of Scandinavians were there early, had been taken out on a training run by some locals, and had come up with a new plant name: the 'hang on, wait a minute bush'. Supposedly each time they came to an area of gorse, the Scottish leader had said, "Hang on, wait a minute..."

Star Posts, JK '75. About an inch of snow had fallen overnight, and I was one of the first starters: magical.

And then 3 am on Monday when the caravan owners drove out of the campsite whilst the ground was still frozen...

Sheffield, JK 1978. The wind got up. I was sat in the front of my tent, cooking, watching frame tents rolling past.

Bigland, JK 1992, when we planned the relays. The organiser (Bob Forster) running around, making sheep-dog noises, trying to coax a dozen sheep back into the field they had got out of. And the start of the Open class: the first leg went past a paddock, marked as OOB, where lambing was going on. There was a concern that, from the mass start, runners might blunder through the paddock (and apparently they did all plough through a mound of fresh stable-sweepings close to the start) so a group of us spread out in front to deflect anyone. We heard the whistle: "They're on their way." 30s of silence. "Fix bayonets!"

Never did find out who it was who said that.

JK Relays, 2008, Eridge Old Park. The weather. Having sunk in that bog just before the finish, falling snow or not, I had to remove all my kit outside the car. And then realised that I could no longer see the end of the car.

Slieve Croob, JK 2011, controlling. Arriving on Wednesday evening to be met by the planner with "Did you get my message? We have a problem." One of the landowners had given permission to use some land which wasn't his; the real owner had brought sheep up, found controls, and wasn't happy. Fortunately, it only affected the elite courses... Replanned Wednesday night, moved controls then sorted out new CONDES files on a laptop on my knee in a field on Thursday morning, new maps printed Thursday afternoon. Apparently nobody noticed.

Then on Sunday morning, having finished checking controls, I looked down from the fell in bright sunshine at the distant solid line of competitors heading for the starts, and all was right with the world!

Memories of the JK Online
Have you got any old photos, maps, stories, snippets to share? Over the JK week, British Orienteering will publish as many as possible so we can share our experiences and understand more about this fantastic event together. Email to: info@britishorienteering.org.uk 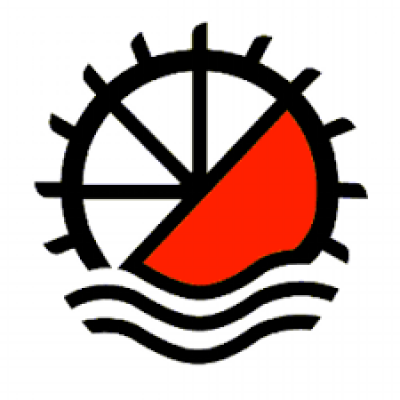 By Arthur Vince, Planner of JK 2010 and member of Cornwall Orienteering Club (KERNO)

Photo: Arthur Vince (KERNO) - Planner of JK 2010 and next to rootstock in Cookworthy Forest in Devon.

Memories of the JK Online
Have you got any old photos, maps, stories, snippets to share? Over the JK week, British Orienteering will publish as many as possible so we can share our experiences and understand more about this fantastic event together. Email to: info@britishorienteering.org.uk

Tom comments:
"This was our first full JK.  We had had a previous taster with joining in with the foot-freezing relays at JK 2018.  Such lovely weather on Day 3 of JK 2019 and all four of us had a brilliant time, even though our orienteering wasn't always brilliant.
Looking forward to JK 2021." 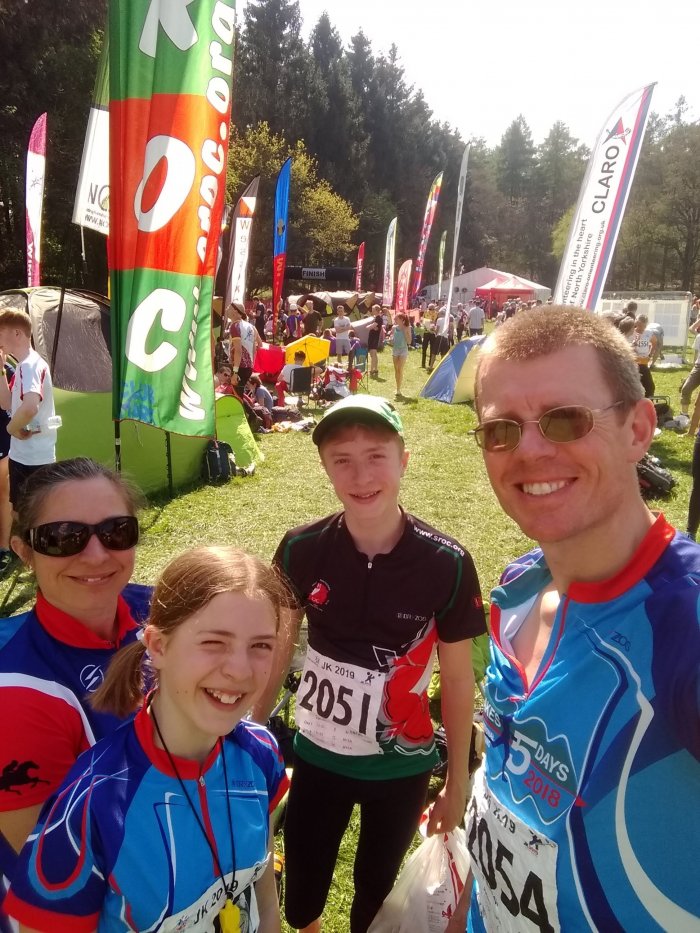 The first race of the 2018 JEC programme saw 14 GB athletes across four teams take to the streets of the Swiss village of Villars-Sur-Ollon, in a fast and frantic head-to-head format, the first of its kind at junior international level.

Leading off their respective teams were Fiona Bunn (GBR1), Tara Schwarze-Chintapatla (GBR2), Emma Wilson (GBR3) and Anika Schwarze-Chintapatla (MIX1) and the pace at the front of the pack was unremitting in its intensity, as they headed uphill and away from the start line for the first leg. The courses included several long route choice legs, with the gaffling managing to split some of the teams early on, followed by some shorter, faster legs as the runners returned towards the assembly.

Ten minutes later, the first athletes headed into the arena passage, and it was to British cheers that Fiona descended to the spectator control in first place, with GB debutant, Anika, only around 10 seconds back from her, and comfortably in the top 10. These two continued to work hard around the final short loop and set up their outgoing runners for the next leg beautifully, ensuring that they both went out in the leading pack, with Fiona finishing in second and Anika in sixth. Eddie Narbett now took up the reigns for the first team and, although he wasn't happy with his overall performance, having dropped sometime in the middle of the course, he still brought the first team back in 9th and fighting for a podium position, only 18 seconds off sixth place at this stage.

Freddie Carcas on the third leg then ran a controlled race to stay in contention, running through the spectator control in the middle of a group fighting for places 7 to 12 and still well in touch with the leading pack and duly handed over to last leg runner, Laura King, with the team sitting in 10th. Laura then ran a superb final leg to pull in several of the athletes in front of her and an exciting sprint finish saw her cross the finish line in a dead heat with the Swiss 3rd team last leg runner and pull the team up onto the podium in joint 6th.

Across the rest of the squad, there were a number of steady runs, resulting in the Mixed 1 team finishing 36th, the 3rd team in 41st of the 64 teams competing in the event and unfortunately the second team were disqualified. The athletes are now resting up and preparing in the hotel for the middle race tomorrow at Monthey, where it is hoped that the area suits some of the technicians in the squad and more good results can be recorded by the team across the two classes of M/W18 and M/W20. 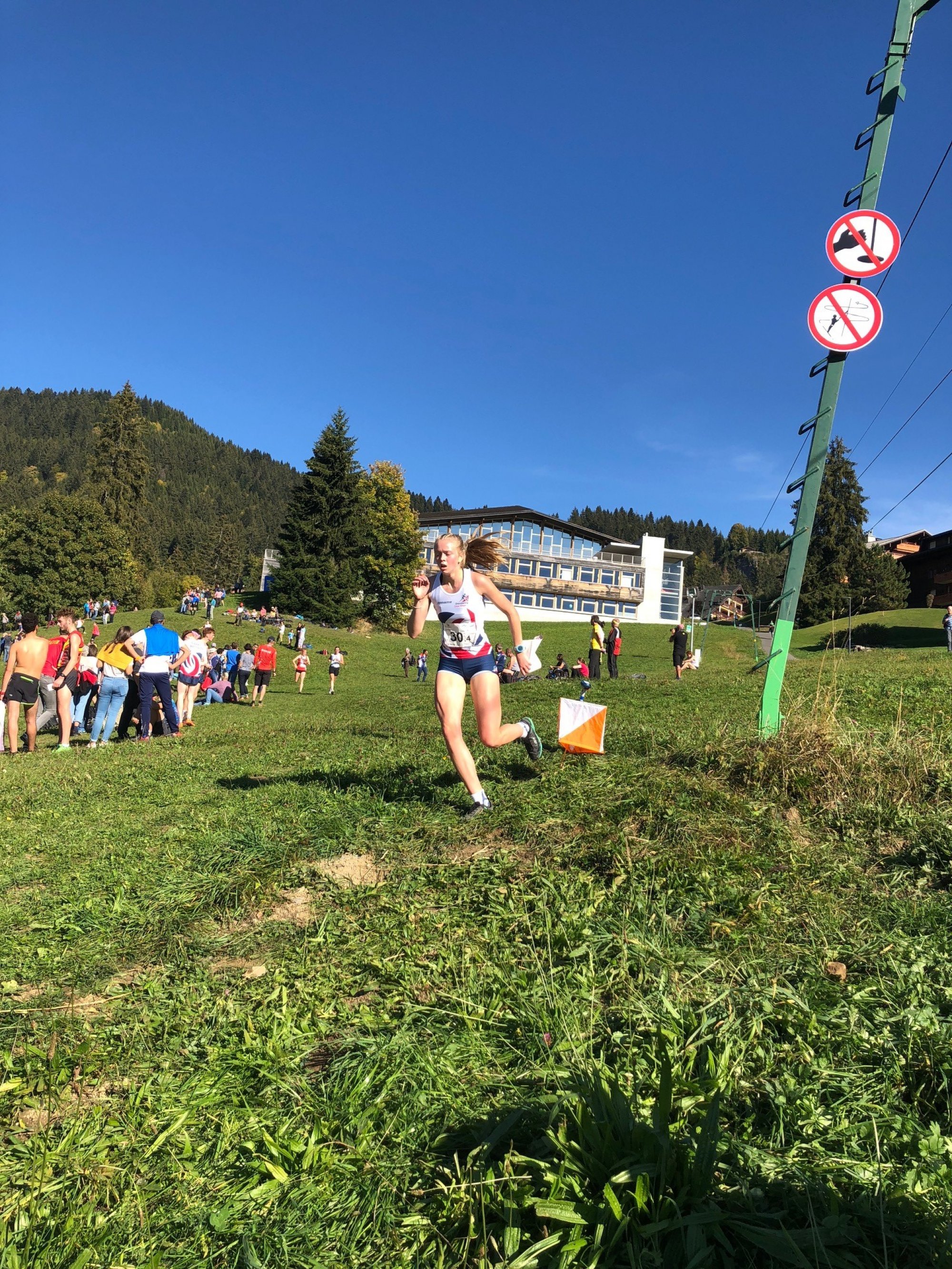