Throughout the week British Orienteering will be publishing a series of articles, news stories, snippets, maps, photographs…The idea is that we don’t forget what makes the JK so special to us by sharing memories of the event online.

British Orienteering is working hard to gather interesting content that we have in the archives, past editions of Focus, history and facts…

Here is where you can help!
British Orienteering are asking for members and clubs to think back and send in any content, photos, specific snippets or memories you personally hold dear and want to share with others who love the JK event as much as we do. Maybe you remember the year when your club achieved your best JK result in the Relay? Did you attend the very first JK event? What do you personally remember about it? Have you ever witnessed and been inspired by one of the elite champions? Have you got any old photos / maps, stories? Over the week British Orienteering will publish as many as possible so we can all remember this fantastic event together. 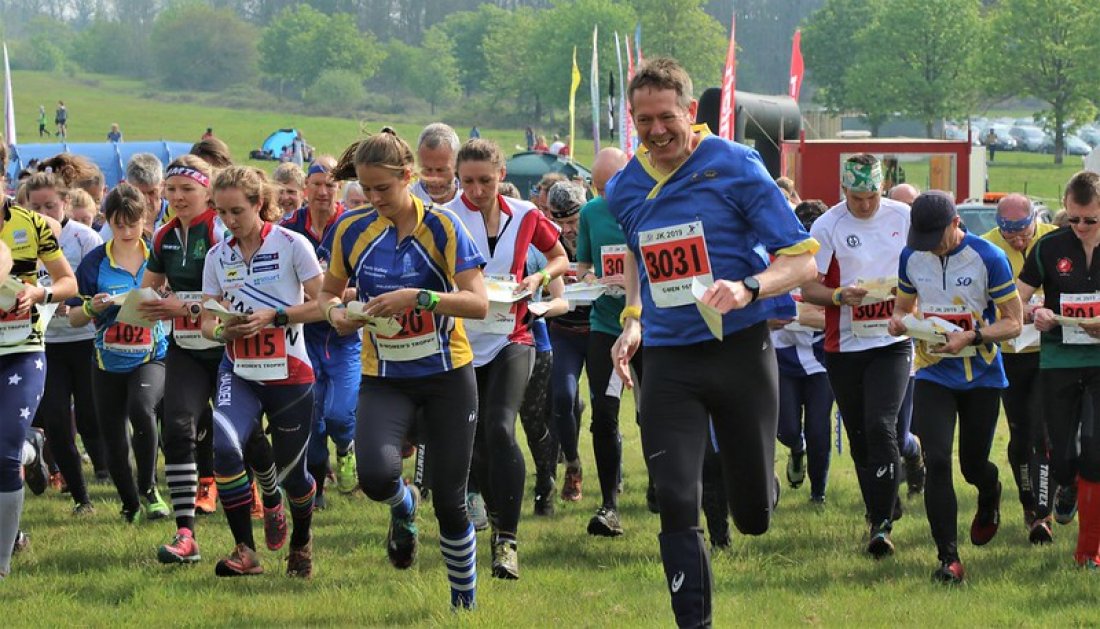 Well we have to be careful here! 52 held, yes, but 54 planned - the 2001 edition, planned to be in the Forest of Dean, was cancelled because of Foot and Mouth Disease, and of course this year’s in the North-East has fallen by the wayside too.

The first two JKs, both held in Surrey, were single-day individual events with an integral team competition. It was first in 1969 that a relay race was introduced, with the Open class run for the JK Trophy. From that year the JK has always been staged on Easter weekend, in the 1970s with a 4-day programme consisting of a training event (Good Friday), Individual – classic distance (Saturday), Relay (Sunday) and a ‘Run-down event’ on Easter Monday. From 1980 the Individual developed into a 2-day event and the Run-down (re-named Relaxation) event was dropped. The JK Sprint on Good Friday was introduced in 2006 and the weekend programme has remained the same ever since.

JK weekends have been held in all of British Orienteering’s constituent Associations, although only once in East Anglia and in Northern Ireland. Eight JKs have been held on SEOA’s territory and seven on SWOA’s. Sometimes two OAs have combined to stage a JK, and on one occasion (2007) it was organised centrally by British Orienteering Federation.  JK 74 in the South-West was notable as the first event in the UK to attract more than 1,000 competitors.

On Sunday 15 March 2020, at what was a last go at formal orienteering for some time over 1,800 competitors from 67 clubs took part in the CompassSport Cup qualifying rounds. Excluding the cancelled Harlequins event, ten clubs of the twenty six which made the Final did not qualify in 2019, so providing a good turnover.

The largest field of the day was at the East Pennine event at Fixby and Bradley where 496 competitors took part. South Yorkshire continued their run of qualifying for the Final with 74 competitors, with Airienteers taking second place and Derwent Valley third. In the Trophy, home team East Potteries qualified for the Final after missing out in 2019 with Nottingham in second place, qualifying for the first time for since 2011.

North Gloucester hosted the South West round with 389 Competitors competing in the Forest of Dean. Bristol were once gain the Cup winners with Wimborne winning the Trophy round and Southampton in second place also qualifying for the Final.

Two hundred and ninety competitors ran at the event organised by London Orienteering Klub (LOK) on Hampstead Heath, where South London with a good turnout of 59 competitors pipped Southdowns Orienteers (SO) who have qualified in the Cup for the previous four years. Guildford qualified easily in the Trophy competition.

In the Lake District West Cumberland defeated the home club, Lakeland to make the Final with regular Finalists South Ribble winning the Trophy, in both cases by a small margin of only nine points.

The smallest turnout for the day was at the South Midlands event at Aspley Heath but provided a close finish in the Cup where Leicestershire beat the home team by just 10 points. Essex Stragglers qualified for the Trophy Final. Aspley heath had an entry limit of 250.

Great thanks are due once again to the clubs, officials and club volunteers who gave a great deal of time to hold six successful events and to Harlequins who had everything in place for their event to be thwarted by the weather.

All the clubs from the cancelled round have been given a bye to the Final.

A full set of results can be viewed here.

The planned date for the Final is on Sunday 18 October 2020, organised by Octavian Droobers and City of Birmingham Orienteering Club at Sutton Park, Sutton Coldfield.

British Orienteering is monitoring closely the developments relating to the spread of coronavirus infection (COVID-19) and noting the updates and advice given by the UK Government, the World Health Organisation and other UK public bodies.

The UK Government has indicated that “banning large gatherings is one of the least effective measures a country can take”.

We recognise that the Scottish Government has taken a different approach in that from Monday (16th March 2020) “all large gatherings above 500 people with the potential to impact the emergency services should be cancelled to prioritise the Covid-19 (coronavirus) outbreak”.

We take the safety of our members and all those involved in organising and delivering competitions and events very seriously and will continue to monitor the situation and potentially introduce further guidance or measures as the situation evolves.

However, you must not come to any British Orienteering competition or activity if you fall into one of the following categories:

Competition organisers should look at opportunities to reduce the risk of close contact for orienteers, officials and volunteers.  For example:

As you can appreciate the situation is changing rapidly and we will keep you informed of any further developments or changes.